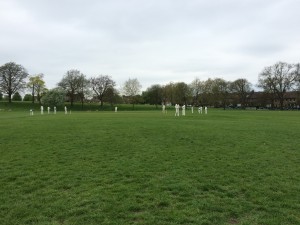 The crowds stayed away for this chilly opening fixture

The season started at the end of April thanks to sterling work from Dario finding an opposition with a pitch. It was a wet pitch but there you go. New captain Geoff won the toss and perhaps attempting to lay down an early season marker for individuality bravely elected to bowl. The Nomads openers were watchful to start on a pitch that offered a decent but unpredictable level of bounce. Khalil claimed the first scalp of the season when an opener managed to deflect a legside delivery off his boot onto his stumps as he looked to play it fine. This brought Ollie to the crease who proceeded to hit 98 with some excellent running (especially 2’s when he was on strike) and lusty hits. Even Ed’s beamer / short-ball-he-ducked-into combo didn’t slow him down though it did thankfully persuade him to replace his Rasta hat with a helmet.  Gilo accounted for the other opener but in two decent partnerships Nomads were taking the game away from us on what certainly seemed should be a low scoring wicket. Zia bowled well though and just about kept us in the game. After an unsuccessful 2 overs that went for 28 leading wicket taker for the last two years Kamal had been withdrawn from the attack but with a change of ends he came back to remove their number 4 Andre for 38 and in his second spell took 4 wickets for 7  from 4 overs with some accurate bowling. Ollie was run out for 98 as he once again attempted to come back for 2 to retain the strike, taking on Siv’s (borrowed from Salix) deadly arm at fine leg. 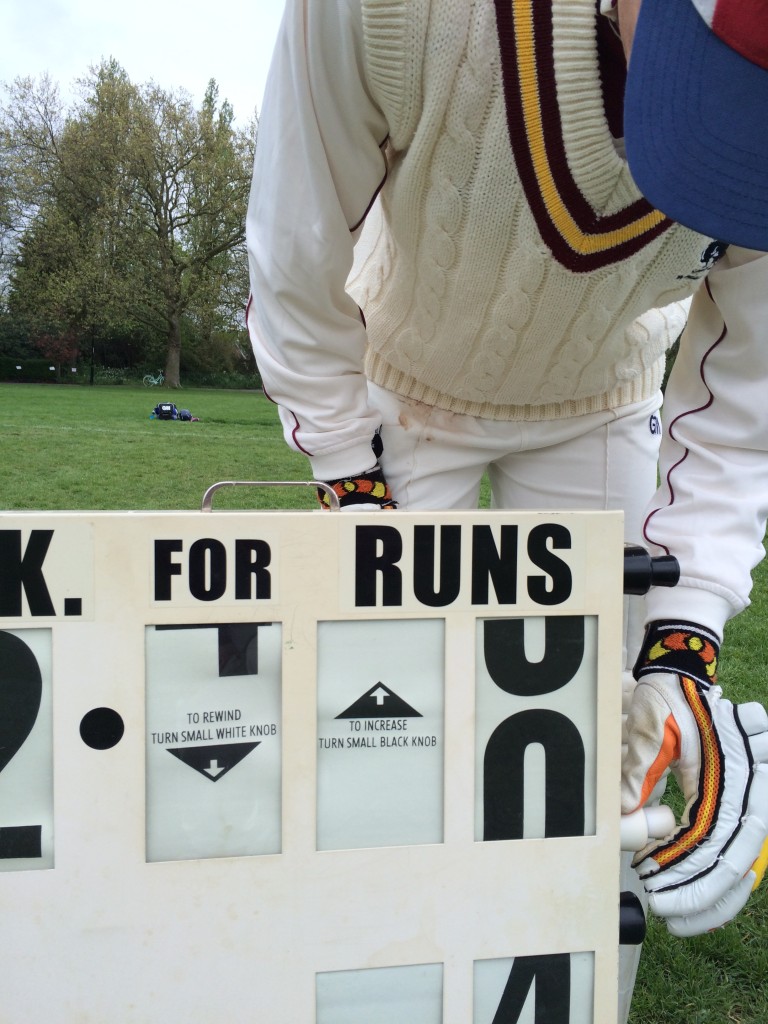 Slowing down when he approached his hundred from their number 3, good tight bowling and a notable drop off in the quality of the batsmen all played their part in a slowing the scoring rate astonishingly. Nomads were only able to add around 10 runs in the last 9 overs losing 7 wickets in the process. Khalil 7-3-4-4 and Kamal 6- 1-38-4 were the chief architects and in keeping Nomads to 172 we felt we had a decent chance to win the game.

Al and Pip opened the reply for the Whale but neither really got going, Al bowled for 2 and Pip driving straight into the hands of cover. That brought Matt Kelly and Siv together and their partnership of 82 for the third wicket was of a high standard against some good bowling and on a pitch and outfield that made boundaries especially hard to come by. They kept us up with the rate but there were another 80 runs needed when Matt was out cutting a bad ball to point. He had batted excellently against the genuine pace of the opening bowler and was understandably disappointed to go for 41. Ed hit some lusty blows in a quickfire 14 but departed caught behind and when Zia was out first ball on his debut (Im sure not the first Whaler) things were wobbling severely. We only needed 5 an over but the bowling continued to be tight with no weak link. Siv was excellent at one end but the other end was a worry. Rich made 11 before playing all round an innocuous straight ball to be bowled and Khalil soon followed lobbing a simple catch back to the bowler for 3. There was still hope with the new skipper heading out to bat but when he was bowled (arguing) for 2 the writing was on the wall and sadly when Kamal was out going for a second run that no one other than him had considered a possibility we had fallen short which was not at all fair on poor Siv who had batted almost the whole innings for 71* and deserved better support, though playing for Salix he should be used to being left stranded.

It was a good game with several ebbs and flows, one that got away from us but played on the whole in good spirit and Nomads did well to accept the umpires decision on several occasions where they were clearly frustrated (and wrong). Great to have started the season and got a game in.

Champagne Moment:        The runout above

The first game is on Sunday 26th April against new opposition Hobgoblin Nomads. At the time of writing there are still spaces available – email whalerscaptain@gmail.com if you would like to play.

Also please make sure the Captains vs Presidents match is in your diary: this will be on Saturday 8th August.

Finally the pre-season social is this Thursday 23 April – details from Channa very shortly.