On a cloudy, changeable afternoon 11 Whalers turned up to Kings House School that was looking like the football season had just finished. The outfield was bumpy and brown (mud, not scorched) but the wicket looked green and fresh. We were about to embark on a match against a new, unknown quantity, Isleworth Cricket Club and captain

Dan, in winning the toss, never hesitated in his decision to bat first, although in the long walk from the middle he actually forgot what he had decided to do and had to wait until the oppo captain told his team mates before informing us!

So El Presidente and the very surprised Pete Richards strode to the crease to face the first few balls of the Whalers’ 2016 season – and unfortunately in Pete’s case it was very few balls. First ball of the second over he was bowled by a beautiful delivery which brought Roland to the crease. After a short flurry of largely unsuccessful square cuts, Roland was also bowled…yes, once viagra feminin forum commander again trying to square cut. This brought Stu to the crease to join Al who was resolutely holding up his end – for another over. He was smartly caught and this brought debutant Sam in. Having not played for 10 years, and without taking guard, he did look a little rusty. As did Stu, who after scratching around for three overs got frustrated and was bowled by a good slower ball. So after 10 overs, the score was 18 for 4. Veterans and newbies alike sensed what was coming…but they were wrong! Sam was joined by Jiff, the former teasing the field by lofting balls into the in-field precisely between fielders, the latter hitting lustily anything that came near him and over the course of the next 13 overs they put together an excellent and much needed partnership of 81. However, as so often in cricket, one wicket brings two and no sooner was Jiff caught out in the deep for a very accomplished 56, Sam was bowled for 21 and the Whalers were suddenly back in a pickle at 101 for 6. But fortunately Dan and Khalil were both up to the challenge of rebuilding afresh – there was much concern for Khalil’s hamstring as Dan scampered his usually singles and turned 2s into 3s, but Kahali insisted it was fine – he was just very unfit. The pair put on another 50 runs and by the time the innings closed and having batted out their 35 overs the Whalers were 155 for 8 – a modest but very defendable total on this pitch. Hats must go off to the Isleworth opening bowlers – between them they bowled 14 overs for 24 runs and took 5 wickets.

After tea, the Whalers felt confident if not arrogant in the field. With a side boasting at least 8 genuine (sorry Al) bowlers, the total was a defendable one but we would have to work hard. The openers Jack and Nick did every bit as well as the Iselworth openers in their first spell, and once Khalil was brought into the attack having got his breath back, the Isleworth top 4 were back in the hutch for 4, 1, 1 and 5. There was a remarkable symmetry between their innings and ours and with some incredibly tight bowling and terrier-like fielding the Whalers applied a huge amount of scoreboard pressure. Bowlers were rotated expertly by Dan, and were well supported by two run outs – one particularly fine one where Dan picked up and threw down the stumps from midwicket to effectively end their resistance (although this was only right and proper, as he had dropped the dolliest of dollies a few overs earlier…). The final few overs were bowled by Jiff, Jack and Khalil and despite being creamed back over his head for a huge 6 by their number 11, Jiff finished off their last remaining recognised batsman who had made a very fine 40, to leave them on 105 all out.

So the Whalers ran out victors by 50 runs – something at one stage that looked about as good a bet as Leicester winning the Premiership back in August. But a spirited all-round team performance, particularly in the field, saw us home in what was a more even match than the score probably suggests. The fines session was remarkable for its calm serenity and for the fact that Kamal in fact picked up fine of the day! Man of the Match went unanimously to Jiff, with Dan picking up both the Champagne (for his run out) and Muppet (for that dropped catch) Moments but all in all this was a performance where everyone had contributed in one way or another. 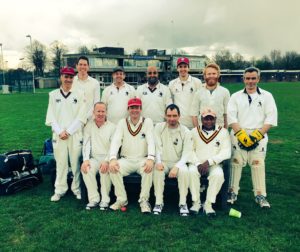