The Whalers convened in deepest darkest Surrey/South West London for their now traditional last match of the season, a timed game against the Believers. Nearly everyone struggled to make the early meet time but we still managed to get underway at 12.20 which gave plenty of time for a full match with the condition of a minimum of 20 overs to be bowled after 5pm.

Matt won the toss and chose to bat. The pitch looked a little uneven but we wanted to try and take control of the match. The decision didn’t look great when Geoff went first ball for a diamond duck as he tried to pull out of a pull as the ball got very big on him only to top edge through to the keeper. Pete then joined Stu at the crease and the unpredictable bounce continued with some rising very sharply from a length and some grubbing through along the ground. Pete had the mind set to try and punish anything loose but after one boundary skied one to the mid on fielder who took a good catch. Al was the next cab off the rank and him and Stu started to play very well and find the boundary on multiple occasions. The Believers first change bowler was very lively however and manged to get one through Al’s defences for 17. Pip also got a good delivery rising off a length to take the outside edge. Ross didn’t trouble the scorers and when Stu was out for 27 we were 64-6. The pitch was still playing unevenly so we thought if we could get to 120-130 that would be a competitive score.

Seth joined Roland at the crease and this pair steadied the ship with Seth scoring particularly well of their slow left armer. They took the score to 98 before Roland 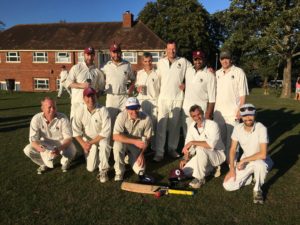 was bowled. Khalil soon followed without scoring and Matt came out at number 10 with the Whalers still shy of 100. After a couple of close scares Matt found his timing and along with Seth kept the scoreboard ticking along nicely. At the second drinks break at 40 overs it was decided we almost had enough and wanted to give ourselves plenty of time to bowl out the opposition so we had a two over thrash which added another 20 runs and we declared on 164-8 (Seth with 56 not out and Matt 21 not out). This would leave us around 38-40 overs to bowl but also give a good chance to the opposition if they batted well.

Nick and Ross opened the bowling and the unpredictable bounce that had been present for all of our batting innings seemed to have vanished. Nick was getting the ball through at a very good pace though and soon had one of the openers backing away regularly. Once Nick got one a bit fuller it took out his off stump and the Whalers were off and running. The other opener had played some lovely cover drives but was also playing and missing against Ross’s out swingers. He eventually fell to a beautiful delivery that left him and took the off stump. After a very close lbw appeal their number 4 also had his off stump knocked back to another fantastic away swinger from Ross. Their number 3 was looking very dangerous however dispatching anything slightly loose to the boundary. After one drive through the covers for 4 off Nick he tried the same again the next ball only to pick out Al who held onto an excellent catch as it was really travelling.

That left the Believers 28-4 after 14 very good overs from the opening bowlers. Batsmen 5 and 6 seemed determined not to hang around and took the attack to Matt and Geoff. There were quite a few chances created with the ball just falling short or over fielders but there were also quite a few boundaries struck. After a big 6 Geoff got his man with a lovely Yorker and a few overs later removed the dangerous number 6 who went for one big shot too many and hit one straight up in the air which wicketkeeper Stu ran to catch. Geoff also bowled their number 7 with another good delivery.

The Believers were still playing shots and although a few made the boundary again there were chances in the field. Pip had replaced Matt and bowled well eventually tempting their number 9 into lofting a drive which Matt took running in from deep mid-off. Pip also removed the next batsmen as he whipped one off his legs firmly but straight to Geoff at square leg. Geoff seemed very surprised but still clung on and also hurt his thumb in the process.

That left the Believers on 105-9 and the Whalers had one wicket to take to finish the match. Eager to have one of Rowlands beers Matt bought Ross and Nick back into the attack and it was Nick who took the final wicket, finding the edge and Stu taking an excellent one handed catch.

All in all it was an excellent all round team performance, posting a very competitive total on a difficult pitch, bowling well and taking all of our catches (that certainly doesn’t happen very often). Stu also cemented his position as leading run scorer for the season and Nick did the same in the bowling department.

M-O-M – Seth, excellent 56 not out
Champagne – Al’s catch in the covers off a fierce drive from their best batsman
Muppet – Geoff, Diamond Duck (special mention for him injuring himself taking a catch)

A dark and gloomy Richmond Green played host in the away leg against old rivals The Cricketers. Captain Nick lost the toss (he is prone to do) and the oppo decided to bat.

Right from the outset the Cricketers attacked the ball. The runs flowed as they romped to 40 odd without loss. Skipper Nick and Khalil bowled through but were unable to make a breakthrough with the ball going far too often to the boundary. We were playing a 35 over game on a pitch that looked like it had been until recently a home for moles. As such the wicket was a temperamental devil. The ball rising of the gentlest delivery to graze the batsman’s helmet and in the next sitting up to be smacked around.

The Whalers let the nerves show with a variety of dropped catches and It wasn’t until Roland, standing at first slip, managed to palm a blinder of Nick that the Whalers bagged their first wicket. The replacement batsman didn’t fair well with Khalil bowling with rising fury and eventually rewarded with a thin nick which wicket keeper Stu took comfortably.

The Whalers then turned on the pressure with a much tighter performance in the field. Andrew Sheridan bowled a fantastic over taking the voracious openers middle stump with a beauty that cut in from outside off stump to hit middle.

Then followed a flurry of wickets. Andy taking a further two wickets to match Geoffs two. There was a magnificent left handed diving catch by Roland standing at short mid off which eventually was made Champagne moment.

The Cricketers had collapsed to 81 for 7 but their number 8 and 9 made a flurry of runs and it wasn’t until Seth came on that the wickets started falling again. Seth ended up with 2 wickets and Andrew Sheridan took one more to finish his spell with 4 for 31 of 7 overs.

It was an excellent performance overall with some tight fielding and the Whalers felt good, going into the change, having bowled out the oppo in 31 overs for 133 runs. Wickets all around with Andrew getting 4, Geoff and Seth getting 2 each and Nick and Khalil with 1 each.

Now all we had to do was bat sensibly and make 134 runs. Simple right? Wrong.

It would be easy to blame the wicket. Well it certainly played a huge part, sometimes staying low, sometimes sitting up and sometimes flying into decapitation mode. Seth was the first to fall, having been rattled by a blow to the chin he nicked one to start the collapse. Stu in next got some quick runs and the whalers were 18 for 1 when the ball rose up on Channa who was honestly trying to drive the ball. Result, a simple caught and bowled. Stu didn’t stay much longer after that and neither did replacement Andrew B. That left Luke and Andrew Sheridan at the crease. They stayed around for a bit, but the Cricketers sensing a lot of blood in the water quickly wrapped it up with Luke first to go, after being frustrated by some borderline no ball full tosses. Andrew S fell next caught behind after some very sharp bowling. He was followed by Khalil and Roland who did not trouble the scorers leaving poor old Nick and Geoff to pick up the pieces. It wasn’t meant to be as the Whalers playing with just ten men collapsed in a bloody puddle for 49 runs in 18 overs.

Still it was a winning season wasn’t it!!!

Man of the match – Andrew for 4 for 31 of 7.
Champagne moment – Roland’s amazing stretching diving left handed eyes closed catch at short mid wicket.
Muppet – Stu for running 30 yards screaming like a banshee so close to the ground that he resembled a greyhound after a rabbit, to catch a sky ball that was under Channa. Channa sensibly got out of the way least he be killed. Stu dropped the catch.