An overcast but brightening day saw 10 Whalers assemble  ready for the toss on a dryish looking wicket. Dan , winning tosser, soon elected to Bat after the Exiles had decided on a match for 40 overs in duration.  Clearly he wanted a good blocker upfront  in  hope of  grinding out some runs early on so he put Roland and Stu in at the top. Plan A was soon in tatters as  Roland was back in the hutch on only  the 3rd ball to swinging ball that did everything. More probably was the lack of foot movement and cross batted shot was the real undoing for Roland and his first ever Whalers Golden!
However in came the excitable Khalil  promoted up at 3 and in and got off he mark with a nicely clipped 3.  Stu at the other end was already settled and turning the ball square off the pitch and was soon sharing in with a clipped 3 and two driven 4’s. Khalil soon joined in the fun with a nice cut to the shortest offside boundary but in the 4th Over he got his execution wrong with some miss timed pull and head in the clouds shot and was easily caught. El Presidente Al was in at 4 and was soon under pressure. Hence after scratching around for about 10 balls he was caught off the opening Bowler for 0 At and the Whalers were struggling for 22 for 3.

Cometh the hour and cometh the late one, Pip ,to shore up the innings. Occupation was now the name of the game and Pip’s watchful eye and Stu’s steady and continuing accumulation nicely settled the innings along. The change of opening bowler to Chris soon helped with a few looser deliveries however the scoring rate was picking up with Whalers 50 being struck in the 10th over. !!
Just when life seemed to  easier around about in the 15th over Pip was gone caught for 18 with the score on 79 and a useful 50 run partnership.  Zia was the next man in and was soon under pressure from the 2nd change bowler however the first change bowler was offering some loose deliveries and Stu was tucking in.  In fact Stu had nicely spread the field and was soon approaching his 50. After some pushing and missing from Zia he suddenly came alive and hit Chris Ling for a couple of Sixes in the 24th Over and the bowler went from 12 runs from 5 overs to 40 runs conceded from his 7 overs and he was quickly withdrawn. At this stage Stu had nicely passed a trouble free 50 and the partnership was motoring along. After 15 overs of this partnership was broken when Zia being bowled just 3 runs short his 50 but this pair had smashed a very handy 82 runs to the total. Tariq was next in and continued with Stu on a similar theme but not at quite the same run rate. Stu Terrell couldn’t quite see the innings through and charged one of their bowlers after was caught behind for a lovely and well needed 87 runs.  WELL PLAYED. Geoff soon followed for the third duck of the Whalers innings  Tariq hit a nice couple of 4’s and whilst Dan played a small cameo innings by gaining 11 runs. JT broke his sequence of ducks by clipping his first scoring shot for 4. The only other note of controversy was a tight run out of Tariq in which Al gave the benefit to the batsman. The Whalers innings finished in a creditable 206 FOR 8

In reply the Whalers were on it from the start having to defend with only 10 men. Stu continued his marvellous match by catching their opener off Khalil. Khalil bowled his 6 overs in there spells but only conceded 17 runs with 2 maidens. JT had also opened the bowling from the other end. Geoff soon replaced with Khalil and was soon rewarded from a fine left handed diving catch from Roland. To be fair the ball deserved to be hit but also credit  Dan by moving Roland back to the ring of fielders in the offside at the start of the over. Pip also caught the other opener and Whalers had 3 cheap wickets. The pressure was maintained by Geoff who bowled batsman number 4 and their top order had scored approximately 19 runs for 4 wickets. However soon followed a couple of Dollys being grassed, step forward Khalil who literally stepped forward too soon and completely  misjudged a straightforward one off Dan. Not to be outdone Al missed a knee high Dolly as well one to his belly area! One of those dropped was off the opposing Captains however Al was let off the hook by their Captain being bowled by a full banger from Geoff’s very next ball.

It wasn’t all going the Whalers way especially as Batmen number 5 began to straight drive a lot of ball despite needed a runner. Indeed Batmen Number 5 and 8 put on a useful little partnership and the Exiles score edged past the 50 mark for 7 wickets. Pip rounded off  his 3 overs and chipped in with a wicket. Dan returned to the attack and to solve the catching issues of some of his fielders managed a caught and bowled of the crucial Batman number 5 and the Whalers were finally  on their way to a well deserved victory  Geoff bowled their last batsman. In fact the last 4 Batsmen of the Exiles Innings were all Bowled. All that was left was to issue the fines and awards it was not contest re the Man of the Match, it went to Stu Terrells fine batting display. Roland  Golden duck managed to dodge the Muppet Moment as Khalil’s inept catch attempt was deemed more crass. Roland’s catch did gather enough votes to make it onto Champagne moment.

A pretty solid all round display especially some very tight bowling through out the Exiles innings special mention to Geoff who’s 8 Overs earned him 4 wickets for only 26 runs conceded and a fine for missing out on a five for. 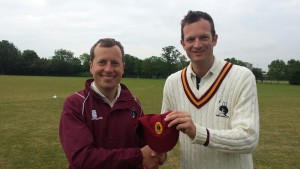 Cap presentation for Pip’s 100th game, ably supported on the day by Mr English Snr and Winston the dog 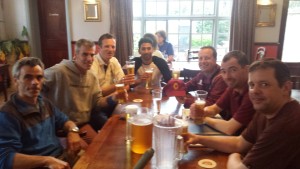 Victory beers – a record 8th win in a row