A cloudy day greeted whalers as they gathered for their first home game of the season. With So many talking points and laughs I will try and keep the match report concise. With Whalers at 10 and Salix at 8 players. Nick Howes was so keen to play for the opposition it was decided that we would play for them and make it a 9 vs 10 a side. However we would donate them a fielder to make it a more even 10 a side. With plenty of gaps in the field the match would determine which of the batsmen’s would get it stay in and take advantage of any loose bowling.

Out walked Will and Andrew to opening the batting. Whalers for once got to a flyer with Andrew Punishing Short or wide with some nice pulls and drives. One drive in the third over was nicely timed but caused maximum damage as ping went Dennis’s Hamstring and off he hobbled.

Now the game was pure 9 a side. Soon Andrew was causing more mayhem and was hitting 4’s quite nicely especially off his hip and driving back down the field. Salix Solution was to bring Mr Howes into the attack to slow the run rate down. His showed now mercy and had Will LBW for a handy 18 runs. Nick was soon causing all kind of trouble and had Al scratching around poking and prodding at the ball. Al prodded forward and got an inside edge into his stumps and Whalers 72for 2. Next it was Andrew turn to edge the other opening bowling but looked to have bumped the ball into the ground before the keeper took the catch. Not waiting for any Umpires decision he walked off for a rapid 48 and fines committee licking their lips at an incidence of pure jug avoidance. The partnership of Ross and Sandy were pushing at most balls and keeping the run rate high. Their Second opening bowler Bala was pitching it up and Sandy was going for it but he induced a high drive and was unlucky to not only to pick out a fielder but who leaped took an athletic catch.

This bought Roland to the wicket and he got the mark with a sweep 4 off his first ball. The match at this stage 92 for 4 wickets off approx. 18 overs and the match definitely in the balance.  However Salix’s left hand spinner was bought in and Ross went attacking his many loose delivers with some classic timed drives, even losing the toe end of his bat with one not so sweetly timed.. Roland was also attacking the open spaces as well with some whipped off side drives as well and the scoring rate kept creeping up. I went into my shell a little bit and decided to give Ross the strike and just hold an end and 10 overs or so went by before Bala still plugging away fired a straight one into my pads and I was gone for 24 but a Partnership of 72 runs.

Salix trying to rotate the Bowlers Tony was bought on for 1 over but after 14 runs to Ross nicely bought up his 50. Mr Howes was bought back on but now Ross was in the grove and was hitting at any speed deliveries that Nick could produce, and a six that sailed and pitched halfway near the opposite pitch bought up much smirking but was deliciously followed up by another driven 4!! Dan was also now in and was demonstrating that his classic late cut and nurdles that were not too rusty. Dan soon drove 1 out into the Outfield   and with much hesitation sent Ross back who promptly slid over on his backside and barely made his ground thanks to a rotten throw. With such a fright with Ross on 97 he promptly smashed another 2 drives for 2 runs apiece and retired with a gusto. This bought our second captain Matt to the crease and with 5 overs left and already well over the 200 mark on board. Three further incidences of note to mention Nick’s drop of a dolly an absolute skier/ miss drive from Dan.! Matt’s cricket shoe having an absolutely wardrobe malfunction before the penultimate match ball which induced a shambles in delay of game!!! and then Matt proceeded to be bowled off the last ball.   However 270 Runs accrued for 6 wickets after 35 overs was a mighty achievement. And Nicks 7 overs had gone for 42 runs but with 2 talked about wickets especially Al’s

Whalers bowling reply started off with accuracy from Dan and Matt.  However their opening had other ideas and was late cutting anything short and after 2 Overs Matt had conceded 19 runs. Dan induced the first wicket in his second over with an in swinger beauty Bowled the aforementioned opener who had 20 runs after 4 overs. Dan soon got his second wicket with will taking a smart catch. From will?  Matt took himself off to introduce Kamal to the game. Kamals first 2 overs or so were a bit wayward, and Salix’s number 3 was attacking and not intent of hanging around with the required run rate creeping up all the time. A doughty Stand of 41 was bought to a close when their number 4 batsmen tried to cross bat Kamal too many times missed and was bowled out with the ball hitting the top of Middle Stump.

Ross seeking more glory had taken over from Dan, who’s 4 overs had cost only 10 runs for 2 wickets.  Ross fast deliveries soon induced an inside edge which was caught by Roland behind the stumps. However it wasn’t given and further misfortune befell Ross when he bowled a full toss at the batmen who was smartly caught only for the Square Leg umpire to call a no ball. Ross wasn’t too happy and even more so when the umpire on reflection thought he might off made a mistake 2 overs or so later. Will replaced Ross and was very accurate deceiving batsmen with loop and pace, Number 6 was soon bowled neck and crock.

It was Kamal variation that was adding in wickets by now and he nabbed another with a lobed up catch, Salix were 94 for 6. This bought Nick to the wicket with accompanying plenty of sledging. Notwithstanding Nick was given a Life when Matt dropped a sitter with more increased chat and verbal’s. With a run rate of about 12 Nick soon gave his wicket away to Kamal with another high lofted drive. With their Batsmen number 3 still in and just passed 50 Salix always had an outside chance of seeing out the overs. New change Bowler Andrew soon saw off that threat with an in swinger of a delivery that he cut onto his stumps for a feisty knock of 56. Will soon bowled their 10 Batsmen Grant who uniquely was out bowled twice in a match for 2 ducks. 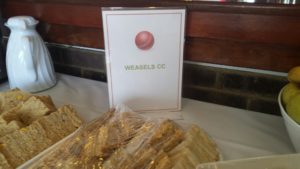 The victorious Weasels CC won by 142 runs retired to the Bar for a lengthy fines session.

2 thoughts on “Ross pings a classy ton in Salix victory”