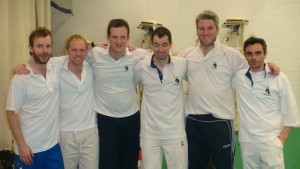 The Whalers bagged their second bit of silverware at the weekend with a good team performance in the indoor tournament at the Oval. The first two games followed the same pattern, with the Whalers batting first and scoring just over 60 (from 5 overs), and then restricting the opposition to about 10 runs less. Highlights of the first couple of games included Stu being heckled by a 2-year old, tidy keeping from Toby, some comedy run-outs, and Al bowling a half-tracker which just about reached the far end.
With our place in the final already secured, the final group game against defending champions the Corridors wouldn’t matter, and this proved to be a good thing, as the Corridors rattled up a daunting 78 from their 5 overs, helped by some less than sharp fielding and one or two controversial run-out moments. Despite good runs from Al, the Whalers fell well short, but it didn’t matter and we were in the final.
By now we were starting to get to grips with the different tactics required for indoor, and our batting in the final was virtually flawless. Stu and Al nudged the ball around and put on over 50 for the first wicket, with Stu being the first batsman of the day to reach 25 and retire unbeaten. Si and Toby kept up the good work, and the Whalers reached 79 for 1 from their 5 overs. When the Corridors batted, Matt got things off to a great start with a tight first over, and the rest of the bowlers kept the pressure up, with wickets falling regularly, allowing us to claim our second indoor title.
All in all this was a good day’s work, against friendly opposition and a decent standard of cricket – let’s see if we can take this form into the outdoor season as well!! 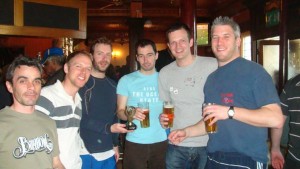