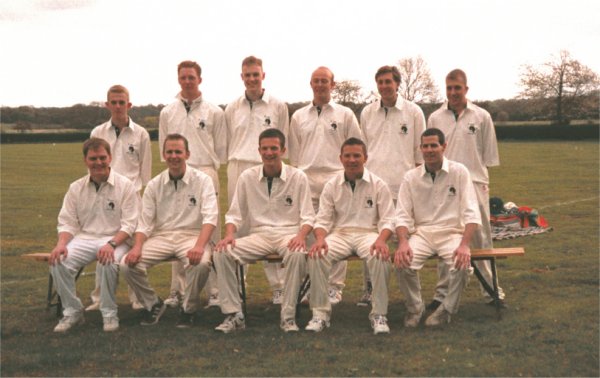 April 27th marked the first date of the Whalers 2002 season. The Whalers, sporting brand new shirts, gathered in Coulsdon South where they would meet their oppostion – Cheam Parish and Sutton Baptists. It was a cloudy and windy day with rain always threatening. The wicket was slow and the outfield even slower. Whalers skipper Al Dickenson did his England captaincy aspirations no harm at all as he duly proceeded to lose the toss. Nasser himself would have been proud. Cheam, last years victors in this fixture, opted to bat first and the game soon got underway once the formalities of the team photos had been completed.

The Whalers started off well with Paul Mildon and Paul Osbourn keeping the Cheam openers quiet and picking up a couple of early wickets. Following this bright opening and the wickets of the Cheam openers, the rest of the Cheam top order began to take the game away from the Whalers as the run-rate gathered pace. This is not to say that chances weren’t offered though. Four or five catches went down in this period with Ian Gibbins guilty on two occasions. Then came the drinks break with Cheam just shy of their 100 at the 20over stage.

The arrival of drinks was a welcome sight for the Whalers as immediately after came the vital breakthrough off the bowling of Ed Kirkness. There followed a good tight spell of bowling for the Whalers with Ed Kirkness, Adam Hanmer and Paul Osbourn that yielded two further wickets. Ollie Bayne was also trying his best with some vociferous appealing. Hanmer also tried the same vociferous appealing but didn’t quite have the same effect as he turned down his own claim. Then the hapless Gibbins, just 10 yards from the bat, tried to redeem himself with a diving attempt at a catch from a full-blooded pull. However, while successfully preventing a boundary and almost breaking a hand, this still goes down as a 3rd dropped catch earning a 20p fine with a further 20p fine for dissent at the fines session. Still, I’m not bitter.

The final 10overs of the Cheam

innings saw the home side stretch their lead with Ashford hitting a quickfire and unbeaten half-century with some hefty blows and in-particular two mighty sixes off Whalers skipper Dickenson. This saw Cheam through to an impressive total of 193-5 off their 40 overs. A good score on a slow wicket with a thicket for an outfield.

How would the Whalers fare in their reply? Not well is the answer with the early loss of Ian Gibbins and James Perrott leaving the Whalers at 7-2. Then a solid 3rd wicket partnership between Paul Mildon and Will Vanderpump offered some help. Runs were hard to come by though and the required run-rate was ever increasing. Then came the drinks break and with unerring parallels to the Cheam innings, the drinks break led to the loss of a quick wicket soon after as Will Vanderpump perished trying to push the innings on. The partnership had ended on 61 – the Whalers record 3rd wicket partnership and the 3rd highest in their short history. Whalers man of the match Vanderpump had gone for 31, the innings topscorer. Paul Mildon’s wicket fell soon after in similar fashion.

The loss of those two wickets led to a batting collapse reminiscent of many of those of the England team we’ve seen so often while growing up. The Whalers slumped from 68-2 to 91all out off 32 overs. A 102 run defeat was a disappointing start to the 2002 season. There were positives to come from the game though. Namely with the ball Osbourn 3-20 and Kirkness 2-24 and with the bat Vanderpump 31 and Mildon 20. There is still work to do for the next game though against Blake Hall CC.

But hey, the new kit is quality!